Futures on shaky ground this morning (~1.4% lower) and “safe-haven” U.S. Treasuries yield the lowest levels in 14 months as concerns over global growth develop in overnight.  The Bloomberg news summary explains it better than I could:
Leading Index Revised to Show Smallest Gain in 5 Months 2010-06-29 08:56:21.210 GMT
June 29 (Bloomberg) -- The Conference Board revised its leading economic index for to show the smallest gain in five months in April, in a release that contributed to the biggest sell-off in Chinese stocks in more than a month. The gauge of the economy’s outlook compiled by the New York-based research group rose 0.3 percent, less than the 1.7 percent gain it reported June 15. The Conference Board said in an e-mailed statement that the previous reading contained a calculation error for floor space on which construction began. Equities slumped in Asia and as the prospect of a slowdown in the fastest-growing major economy fanned concern that the global recovery may weaken. With American consumers boosting their savings rates and European governments moving to cut spending and restrain fiscal deficits, emerging markets in have led the rebound in the past year.
The revision has rattled global investors as the composite sold off over 4%, was down 1.3%, was down 90bps, and is down 2.2% to 2.8% across the board.  Additionally, Nouriel Roubini wrote an editorial in the Financial Times urging toward an orderly default (* FACING `INEVITABLE DEFAULT,' ROUBINI WRITES IN FT…*GREECE NEEDS DEBT RESTRUCTURE NOW, ROUBINI WRITES IN FT).  In , unemployment claims were higher than expected and ratings agency Moody’s made cautious comments.  Watch S&P 1050 for technical support.  And watch Thursday for important global economic data:  , , and Euro ISM.  Further, Friday’s jobs data looms ahead as well… In earnings news, chip-maker MU is down 6% on Q3 results.  Finally, concerns regarding European bank liquidity – and the need to refinance on less favorable terms by July 1st – are also making the rounds:
Beware of the ECB Roll ...
On 1 July, European banks need to repay the ECB EUR 442B that they borrowed a year ago. To smooth the process, banks can re-finance with the ECB at 10am (BST) the day before (i.e. tomorrow)-- but on less attractive terms.
It’s interesting to note that this revised news actually adds fuel to the fire that has been sparked by the recent release of the Economic Cycle Research Institute’s (ECRI) Index of Weekly Economic Indicators, which point to a rather ominous double-dip recession.  I’ll borrow from John Mauldin again, since he’s been my go-to read of late (lots of charts, sorry…):
The Leading Indicators Are Starting to Turn
Even while I was on vacation in , I had to regularly feed my addiction for economic and investment information. Over the course of a few days I ran across several studies on the Economic Cycle Research Institute's (ECRI) Index of Weekly Leading Economic Indicators. The index has turned down of late. Starliper of Rather & Kittrell sent me the following charts and analysis. (I love it when someone else does the work for me while I'm on vacation!)
"The ECRI has been getting some news of late. I did a little work on it, played with the rates of change, and found something a little ominous you might be interested in. The normal reported growth rate is an annualized rate of a smoothed WLI. However, when the 13-week annualized rate of change is used - shorter-term momentum - the decline in growth has fallen to a very weak -23.46%. The other times it has fallen this fast? All were either in recession or pointing to recession in short order (Dec. 2000)." 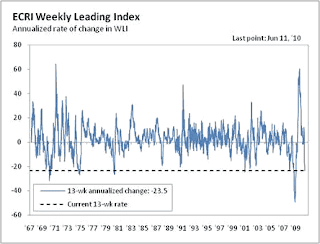 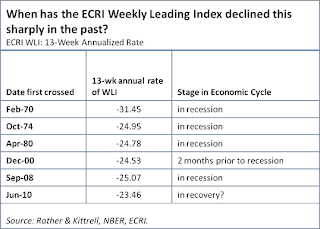 Jonathan Tepper (coauthor of the next book I am working on) sent me this piece from a group called EMphase Finance, based in . They wrote this back in April, as the Weekly LEI was beginning to turn over. They have found a bit of data that seems very good at predicting the economy of the 12 months out. Let's take part of their work:
Terms of Trade and Real GDP
"Many market participants are debating whether or not a double-dip recession will occur within the next quarters. As we are writing our report, ECRI Weekly LEI fell quickly to 122.5 points from 134.7 in April. This indicator did a good job leading Real GDP Y/Y by 6 months over the last two decades. However, ECRI Weekly LEI recently became quite unreliable as it increased up to 25% Y/Y in April, a level consistent with an unrealistic 8% U.S. Real GDP Y/Y! You can notice the problem on the left chart below.

"We discovered a new leading indicator to forecast Real GDP Y/Y, and it is simply the Terms of Trade (TOT). It is defined as the export price / import price ratio. We are pleased to be the first to document this, at least publicly. On the right chart above, TOT leads Real GDP Y/Y by 12 months. The only drawback: underlying time series are monthly instead of weekly, but this is not really an issue with that much lead. Also, the relationship still holds well if we extend to the maximum data (1985)."
Their conclusion?
"As you probably noticed earlier, TOT is suggesting a decline of Real GDP Y/Y to nearly 0% within the next 12 months. Q2 2010 Real GDP Q/Q Annualized to be released on the 30th July may match expectations as it reflects data of the last three months, which were positive in general. However, we are most likely going to see weaker numbers in the next quarters. Will this lead to a double-dip recession? We believe the odds of a double-dip recession within the next 9-12 months are minimal, but odds may increase to 50-, depending on the evolution of variables we follow in the upcoming months."
And while we are on leading indicators, let's end with this note from good friend and data maven David Rosenberg of Gluskin Sheff (based in ).
"For the week ending June 11th, the ECRI leading index (growth rate) slipped for the sixth week in a row, to -5.7% from -3.7%. Only once in the past - in 1987, but the Fed could cut rates then - did this fail to signal a recession. But a -5.7% print accurately signaled a recession in the lead-up to all of the past seven downturns. 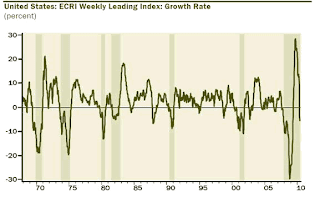