Since people sometimes ask where the title of this blog comes from, here's the story behind it...

Just after Thanksgiving 2002, I found myself deep in anxiety on a plane to Southeast Asia. My girlfriend-at-the-time (GFATT?) and I were heading back abroad for "Round 2" of a year-long stretch of post-9/11 "quit-our-jobs-and-go, life-is-too-short-for-regrets" world travel.  July 2002 to November 2002 had been spent traveling throughout Africa, including South Africa, Zambia, Botswana, Namibia, Uganda, Rwanda, Kenya, Tanzania, Seychelles, and Mauritius.

But a November "break" back in the USA had been built into the itinerary to recoup from African travel, get off the anti-malarials, reconnect with family, and maybe even take a break from one another.  (Lengthy travel as a couple is difficult enough...but African travel is really tough.  There is no way to "get away" from each other.  I can't go out for a run, she can't hit the spa or do some shopping or something.  You are out "in the bush" and basically spend every waking hour together.  This is great for a two-week honeymoon, but I would not recommend it for extended periods.  That is, if you want the relationship to actually work out.  Needless to say, ours didn't.)

As we prepared to embark on the second leg of our adventure, cracks in our previously-solid relationship had emerged, so we were both a bit conflicted at heading back overseas.  (Do you push through and let the incredible experience carry you and then hopefully bounce back?  Or do you bail because a nice trip is just that, and only delays the inevitable?)  Additionally, it had been great to be home and to re-connect with family, especially over Thanksgiving...and maybe we were a bit homesick after all and perhaps getting back on the road too soon?  Further, the SARS epidemic was just beginning to make headlines, affecting places throughout China...including Hong Kong, which was our connecting city.  Finally, the Bali bombing had taken place in late October 2002, and the media had noted that - after Bali - the next most logical terrorist target in Southeast Asia (due to the number of American tourists) was Phuket, Thailand.  So where exactly were we headed on that late November flight?  Yup...Phuket, Thailand.

Of course, these concerns may seem a little silly in hindsight, but at the time, long flights and airplanes were at the top of everyone's nightmare-way-to-die list.  A year after September 11th, and on the heels of Bali, the world of travel was a scary, scary place.  My blog entry at the time captured some of this sentiment.

Anyway, suffice it to say, I was a little frazzled.  Looking back, I was feeling anything but clean, clear, or calm.

After connecting seamlessly in Hong Kong (two thumbs up for Cathay Pacific) and Bangkok, and losing a day crossing back over the international date line, we found ourselves checking into our hotel in Phuket on December 2nd, 2002.  The beach-front setting was incredible, and there was some relief at arriving in one piece, but my GFATT was a bit jet-lagged and a bit annoyed at me.  We had been able to stay out of each other's way in America, but here we were back in another small hotel room - in close quarters - yet again.  She was not happy.  So, I did what any man in that situation would probably do - and something I could not do while in Africa.  I got lost.  Or, to be more specific, I took a taxi - a tuk tuk - into Phuket Town.

Losing myself amidst the sights, smells, and colors of tropical Thailand, I began to feel better.  I mixed with the locals a bit, lit my stomach on fire with a plate of Spicy Calamari, and strolled around town. 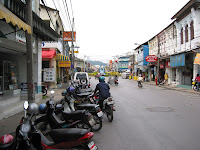 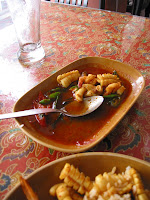 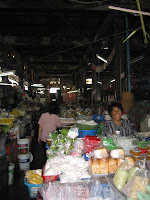 Eventually, I wandered into this temple.  Prompted by the cheerful "Welcome!" sign, I walked inside and was immediately impressed with the calm vibe of the place.  It was serene, peaceful, and relaxing.  And against the stifling outdoor heat, it was actually cool inside.  The anxiety of the past couple of weeks began (helped in no small part by the Singha beers from lunch) to melt away.  It was in this "haze" of relaxation that I passed through the temple and headed out back toward its garden area, where I found a series of trees posted with various Buddhist quotes.  This one in particular caught my eye: 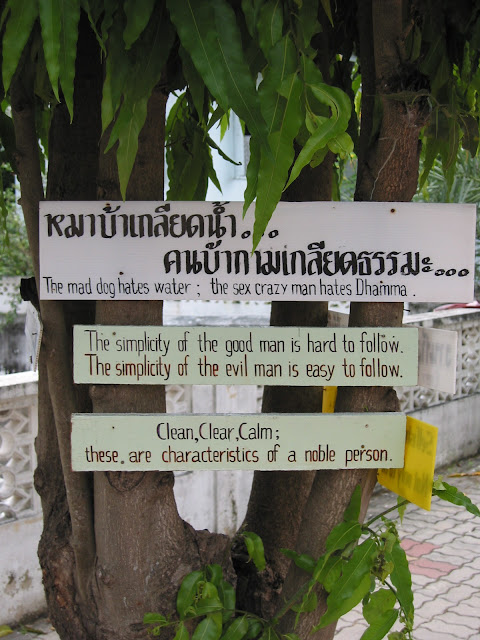 I remember standing there for a bit and just mentally chewing on those words...Clean...Clear...Calm.  It certainly sounded like something I wanted to be.  My Wall Street career had been anything but clean, clear, and calm.  My relationship was not clean, clear, and calm.  And the world around me was far from clean, clear, and calm.  Here was a bit of enlightenment at an uncertain time, thanks to Phuket, Wat Putta Mongkon, and the Buddha.  (In fact, it affected me so much so that I asked the resident monk to write those words out for me in Thai.  I carried them home with me and ultimately it became one of my tattoos.)  I left the temple grounds that day feeling as if I had learned something valuable...and I had also discovered something to aspire to.

Anyway, there you have it... words to live by, discovered in a moment of peace and perspective in an uncertain world...and things I want to be when I grow up:  Clean, Clear, and Calm.