Dear Visitor to Miami: The Follow-Up...

So here's some interesting timing...right after I posted my "Guide to Miami" the other day, two similar items caught my eye.  The first (published one day after mine) is from the Wall Street Journal called "An Insider's Guide to Miami," and you'll find some interesting overlap. The second (published three days after mine) is from ESPN and mentions a particular Miami steakhouse that I also "reviewed."  The full text of both is below. (Gives me some credibility, right? ...right?)

Castles in the Sand 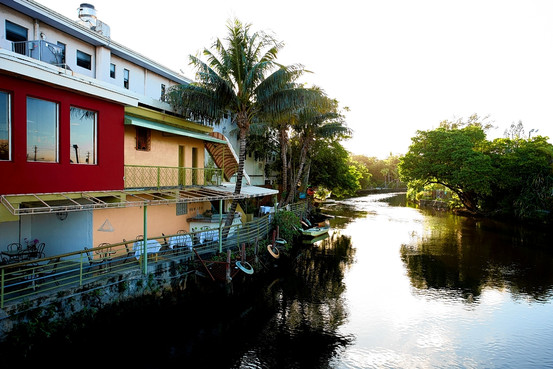 Red Light in the Blu Motel offers excellent dockside manatee-watching.
Ever since savvy developers began turning this riverside farmland into a millionaire's playground (and middle-class dream destination) in the 1920s, Miami has been equally built on style and scam. It's become a tradition for strivers and refugees arriving here to reinvent themselves—and, in the process, reinvent the city.
Miami is elastic, always retaking its shape, whether in the wake of the 1926 hurricane that flattened its beaches, or the "Scarface" era of cocaine violence in the early 1980s. The city would have to wait another decade before the South Beach renaissance would transform a tropical war zone into a hipster paradise.

The Standard Spa, Miami Beach
In Miami's latest reincarnation, artists have migrated from an increasingly out-priced South Beach to cheaper spaces across Biscayne Bay, reinvigorating mainland neighborhoods walloped by the condo bust and financial downturn. The annual carnival of art and money that is Art Basel Miami Beach (playing out across the city Dec. 2-5) is just the high point of a cultural scene that's remaking the peninsula yet again.
South Beach as buzz destination has largely been supplanted by areas like the Design District and MiMo (for '50s and '60s Miami Modern, the ongoing architectural vogue), filled with restaurants both haute and homey, as well as plenty of funky boutiques and clubs.
The Wynwood area plays home to sleek galleries and warehouse walls exploding with graffiti murals. Further south, there are more cultural nuclei in Little Havana, where nostalgia-chic clubs and galleries such as Hoy Como Ayer and Cuba Ocho vibrate with rhythms from new and old exiles. In North Miami, artist studios and independent galleries—as well as thrift stores and Caribbean markets—orbit the Museum of Contemporary Art.
Cubans may still be the largest and most visible group among the 69% of the city that is Hispanic, but more recent influxes of Colombians, Venezuelans, Argentines and Brazilians have brought new flavors and
dramas, as well as new candidates to soak up this city—and then rebuild it from scratch.
—Jordan Levin

Michelle Bernstein
James Beard Award winner and co-owner of restaurants Michy's on the Biscayne corridor and Sra. Martinez in the Design District
Southern Fish Camp: Red Light in the Blu Motel. This two-year-old cafe has a great late-night menu, including wahoo fish dip and burgers, and an intimate bar scene. Excellent dockside manatee-watching. 7700 Biscayne Blvd., edlightmiami.com
Catch of the Day: Garcia's Seafood Grille & Fish Market. Just pure sepia-tone Florida, and it's Cuban, too. You can dock your boat, jump out and have a fab meal. Everything is super simple, fried or grilled. I love the caramel-y sweet fried plantains with grilled lobster. 398 N.W. North River Drive, garciasseafoodgrill.com
China Grill: Hakkasan. Every Jewish girl loves Chinese, and this place is my go-to. They have Maine lobster with chive blossoms and they make their own tofu. It's inside the Fontainebleau. 4441 Collins Ave., hakkasan.com/miami
Fine Dining-in-Residence: Casa Tua. It's a vine-covered mansion that feels like it's in the Mediterranean. Talk about sexy and romantic—it's like eating in a luxe, secluded private home with a courtyard. 1700 James Ave., casatualifestyle.com
Teen-and-Mom Shop: Rebel.This shop is really fun. You can get something super sexy or more covered up. They sell pieces by hip clothing lines and local designers. 6669 Biscayne Blvd., 305-758-2369


If you're in Miami and hoping to sneak a peek at the Heat off the court, try Red, The Steakhouse, in South Beach, which has been a favorite eatery for Dwyane Wade and LeBron James.
The upscale steakhouse, which opened in 2009 and is an offshoot of the original Red, The Steakhouse, in suburban Cleveland, made it to Miami before LeBron, but James' move to the Heat hasn't hurt.
"LeBron was into the Red in Cleveland, but has been to the Miami Red more frequently," said Peter Vauthy, who is executive chef and one of the proprietors of Red.
Though the Cleveland location was a go-to spot for James, there haven't been any negative aftershocks because, Vauthy said, the Ohio location isn't near the Cavaliers' arena.
Red's shrimp carbonara pasta and chicken is a LeBron favorite. Meat eaters can follow the lead of Wade, who likes the C.A.B. prime steaks, Kobe beef, pastas, seafood and fresh lemonade.
"Since we opened, at least 30 different times we've had members of the Heat in Red, along with many current and former NBA players," Vauthy said.
Wade has been a regular since the restaurant opened. Chris Paul, Paul Pierce, Rajon Rondo, Hedo Turkoglu, Rudy Gay and Shaquille O'Neal have also sampled the fare.
Players can be difficult to spot because they often eat in a VIP section behind drawn curtains. They also usually arrive after normal dinner hours.
When Wade walks into the restaurant, "Everyone [gets] a bit starstruck and you could see the guests at the restaurant buzzing about it," Vauthy said.
The restaurant, which is owned in part by former NBA player Charles Oakley, is also frequented by NFL and NHL players. As the Heat's season gets into full swing, Vauthy anticipates an uptick.
"I'm sure we'll see an upswing due to the buzz and personality of having LeBron as one of our guests," he said.
Posted by Ben at 2:18 PM