Futures ~1% higher this morning as Obama & the Democrats compromise on tax cuts and agree to extend the Bush-era cuts two more years to 2012.  Additionally, in M&A news in the natural gas sector, AGL Resources will acquire Nicor for $2.4 billion.  In other corporate news, Citigroup is ~3% higher pre-market as the government announced it sold its remaining $10.5 billion overhang in the company.  Asia was mostly higher overnight and is ~2% higher as the tax cuts were announced at roughly 7pm EST last night.  Also, in Europe, EU finance ministers are due to officially vote for ’s rescue package and they ruled out immediate aid for or and refused to increase the current $750 million debt crisis fund.  Oil +130bps.  Gold +1%.  USD -60bps.  EUR/USD 1.34.
Regarding the tax cut extension – which includes a few other sweeteners, by the way – MF Global had this summary:
Tax Deal Framework
What Happened:  The White House Office of Public Engagement held a conference call to discuss the tentative framework on the tax deal between the White House and Congress.
What This Means:  The “kitchen sink tax bill” now has structure and is nearing the finish line.  We stress that this is a framework and that nothing is set in stone.  We expect the bill to be sent to Obama’s desk by next Friday, December 17th.
We believe this framework represents the floor to the tax negotiations.  There is still plenty of room for more “sweetners” and many details remain for the negotiators (clean tech, ethanol, etc.).
The one year Doc Fix is moving independently of this bill.  The $19.2 billion deal, expected to be brought to the Senate floor in the next 48 hours through a unanimous consent resolution, would be paid for by recovering a greater share of excessive subsidies expected to be paid to low-income people to buy health coverage beginning in 2014. The measure also contains a number of other Medicare provisions that would expire at the end of the year.
The Framework:
2 year extension for all Bush Tax Cuts in 2001/3 bill (including cap gains and dividends);
13 months Unemployment Insurance Extension;
13 months 2% payroll tax holiday on employee side (i.e., reduce FICA from 7.65% to 4.65% up to FICA wage base cap of about $105K);
1 year for “traditional” extenders (Research and Development);
Other extenders TBD (including BABs and other provisions from ARRA, SBJA, HIRE, Energy, etc.);
2 years for individual-level refundables (EITC, CTC, AOTC);
2 year AMT patch;
2 years Lincoln-Kyl Estate Tax ($5/$10M exemption and 35% rate).
From a technical perspective, btw, breaking up through 1230-1235, the S&P appears set for a near-term pop to 1300 (the next level of resistance): 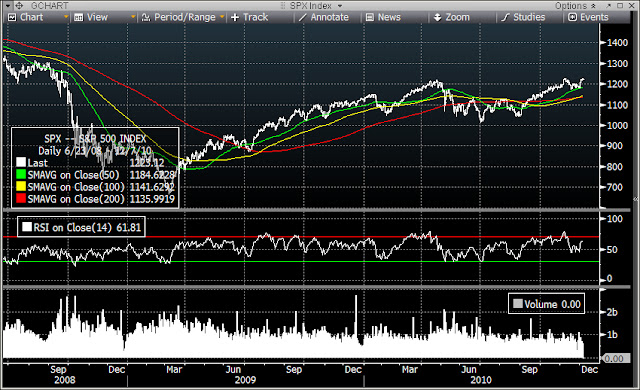 BofAMLCO trader commentary this morning:
Good Morning – The President has made his first move of many to the middle.  Bottom line he wants to keep his job, and will do everything to keep it.   His fold to the GOP on taxes is just the beginning of his campaign for 2012.  Markets reacting well to the news, making new year highs on its way to 1250.    Treasury out of Citi, it will trade an incredible number of shares today.   Ireland’s parliament to hold budget vote late this morning, it must be approved in order to receive aid.  Consumer Credit is out at 3 p.m. est.  I would like to see all the financials lead this tape higher.   Crude above 90.00, no one seems to care.   Inflation is real.  Keep buying the market there is no supply.
TLB beats by 2c.  VE upgrade at JPHQ.  HWAY higher on earnings.  FSYS lowers guidance.  BofAMLCO ups SFD, TEL, WTW.  GSCO ups STP, TSL.  HSBC ups GFI.  MSCO ups RHT.  BofAMLCO cuts MWV, TIN.  BCAP cuts NRGY.  MSCO cuts FIRE.  WEFA cuts NBR.
S&P 500 PreMarket 8:30am (last/% change prior close/volume):